Status of Dalit Women of Nepal

Nepal’s rural Dalit women are among the most marginalized of the world’s poor. This group of about 2 and1/2 million people is at the very bottom of the hierarchy of class, caste and gender in as already impoverished country. The average yearly income in Nepal is US$ 200/-.

The status of Nepal’s women (regardless of caste) is grim. According to a Save the Children study comparing the state of the world’s mother among 106 nations, Nepal’s women are 106th in terms of maternal mortality, literacy and political participation and rank near the bottom in infant survival rate, life expectancy and access to clean water. As in other South Asian countries, Nepal’s entrenched religious social and cultural practices give preference to boys with regard to access to food, education and health care. Tradition and rituals institutionalize the denigration of women and systematically undermine their self worth. Women are not equal to men under the law and are economically and socially totally dependent on the men in their family. The dismal condition of South Asia’s women is well known.

Less well known is the situation of Dalit or so called “untouchables”. For centuries this group has suffered discrimination and exploitation under a religiously sanctioned caste system based on perceived purity and pollution. A nascent civil rights movement now prefers the designation Dalits, which means oppressed. Hereditary occupation, ethnicity or both determines caste identity, and thereby access to education, jobs, credit, health care, and land ownership (Dalits who comprises 21% of the population, own only 1% of arable land).

Although caste discrimination is illegal, the law is rarely enforced. Caste discrimination is far worse in rural areas, where Dalits are excluded from places of worship, prevented from using common water resources and from entering into upper caste homes. Inter-caste marriage is countered by harsh repercussions. In addition, the lowest castes are split into many sub-castes, which traditionally are pitted against each other, further undermining the chance for solidarity.

Since most are landless, Dalits are day laborers, They work as average of 11 hours a day for 10-20 kilograms of grain per year, barely enough to feed a family. In addition they suffer under a form indentured servitude, being obliged to provide goods and services to the upper castes without due compensation. There is a long tradition of Dalits being victimized by local, high caste loan sharks. Harassments and humiliation by the higher castes continuously erodes their dignity, while the fatalistic Hindu belief system perpetuates their sense of disempowerment.

Dalit women suffer under the combined burden of both gender and caste. Only 3% are literate, while 10% of Dalit men can read. For comparison, the overall literacy rate in Nepal is 50-60%, though literacy here often means only the ability to sign one’s name.

Domestic violence is rampant in Nepal and especially widespread among Dalits. Furthermore, sexual violence is also used by both the higher caste and by authorities to settle scores against Dalits- and the perpetrator is rarely brought to justice. According to some estimates, the authorities discount 30% of rape complaints by lower caste women. Finally, as a measure of the desperate situation for Dalit women, the US State Department Nepal country report on Human Rights estimates that 100,000 to 200,000 Nepali girls and women are sex workers in India alone, the majority of them Dalits.

There is a nascent awareness of Dalit issues among a small group of educated, urban liberals, but true social change is not likely to come from outside the community, in part because power and influence is monopolized by traditional high caste men, who have no understanding or interest in the concerns of Dalit women. Nepal’s violent Maoist rebellion, which in recent years has claimed thousands of lives, demonstrates the urgent need for social change among the most desperate. Indeed, a majority of Maoist fighters were recruited from the rural Dalit population.

Although international development agencies have a significant presence and effect in Nepal, outsiders often lack an understanding of the pervasiveness of caste discrimination and the ways in which it is being perpetrated. This often enables the higher castes to be the primary beneficiaries of foreign aid.

The client of ADWAN live unseen by the world, cut off from opportunities created by access to markets, tourism and help from foreign aid agencies. ADWAN is the development program run by and serving the low caste women in rural Nepal. For all of these reasons, ADWAN is unique and fills a void.

Hindu based patriarchal social structure and feudalistic state mechanism barred the Dalit women from being literate, aware, informed and conscious. Their identity, access and participation are doomed in the shadow of religion. They are forced simply to tolerate the violence, harassments, oppression and exploitations.

Dalit women are unaware their rights. They are innocent about where to plea against the brutality. They are completely ignorant about the national and international constitutions, legal provisions, statutes, declarations, manifestos and charters. Even in the 21st century rural Dalit women are still unaware of even basic human rights.

Caste based and gender based violation of human rights is still a major problem in Nepal. The constitution of Nepal-2047 and interim constitution of Nepal-2064 limitedly prohibited all sorts of discriminations and violation of human rights. The government of Nepal declared Nepal as an untouchability free country for several times. But the act of untouchability and discrimination prevails rampantly. It is due to many reasons. There are limited and insufficient laws to punish the perpetrators. The state authority is not serious in enforcement and implementation of the existing laws and provisions. The rural community and society are unaware of the constitutional and legal provisions of human rights.

Not only the national laws there are regional and international laws and provisions guaranteed by different declarations, manifestos and statutes of which Nepal is a party state. Dalit women who are socially, politically, economically, culturally and educationally at the lowest rank are unaware of those national, regional and international declarations and statutes. In addition, Dalit women living at the rural community are totally unaware of their rights and the provisions to take support to combat their plight. Due to all these reasons sexual and mental harassment, rape, physical torture, abuse and exploitation to Dalit women occur every day and everywhere in Nepal. Various case studies and reports have revealed that compared to non-Dalit women and Dalit males, Dalit women are mostly victimized by the inhuman act of human rights violations.

Various GOs, NGOs and INGOs are working to stop the violation of various forms of human rights. But they are confined to urban and accessible places and to advance communities only. ADWAN, formed and run by Dalit women and rural Dalit women as its focused community, has done a lot in this regard. But it is also bounded by the limitations of economic resources. Had it been provided the sufficient resources, it could have done much more in the field of protection of human rights and empowerment of Dalit women.

Because of a number of factors such as illiterate parents, poverty, marginalization and hopelessness, Dalit children are much less likely to attend and complete school and to pass the national School Leaving Certificate (SLC), the basic secondary school qualification exam. According to the Feminist Dalit Organization, only 3.8% of Dalits complete the SLC. Poor families depend on their children’s labor both at home and for pay outside the home. Since girls in general are not valued, their education is often being sacrificed. 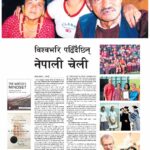